Advancements in artificial intelligence (AI) and augmented reality (AR) technologies open new opportunities for improving safety and productivity in manufacturing facilities. This article from Forbes discusses applications of these technologies over the years.

The manufacturing floors and warehouses have a number of complex issues. Safety is always the first concern, but efficiency follows. Creating workflows is a longstanding technique for improving both factors, but how to improve the results? Artificial intelligence (AI) has begun, in recent years, to creep into processes in manufacturing as it has in all other areas of business. Advanced in AI, networking, and edge devices are bringing another modern technology into the mix – Augmented Reality (AR). The combination of AI & AR are the latest attempt to increase safety and productivity.

Shop floors are busy and dangerous places. Since the start of the industrial revolution, there has always been tension between the needs for efficiency and safety. In the early days, safety wasn’t that important. However, in the last century, that has come to the forefront and most companies lead with that in their messaging, even if there are some that only do it there. However, productivity still matters. Advanced technologies of the last decades have often been focused on how to improve both factors at the same time.

When it comes to AI, early applications were on two, very separate, extremes. First, early vision AI would look for simple safety problems, such as missing hardhats. Second, AI was used to figure out optimal plant processes and process flows. Due to recent advances, systems can begin to integrate those features and others. One way that’s helping do that is AR.

The popular culture seems conversant with virtual reality (VR), as it has been used as a trope in many movies and games have begun moving towards both imitating VR and working in it. While AR had a pop culture moment years ago, with glasses put forward by a large company, that was a failure, and many haven’t thought much about it since. Simply put, AR is the concept of augmenting reality with technology additions. One simple example is the heads-up display, used in fighter planes for years and in some cars, in a more limited fashion, in more recent years. A sector that has been adopting VR is in surgery, with VR, AI and robots extending the abilities of surgeons to know more as they operate.

A couple of years ago, I covered a company where an inspector would wear a headset through a construction site. The images were stored and then compared later to blueprints. Part of the fun of this column is seeing the changes over time. Technology has advanced, both in AI and networking. What those advanced are beginning to accomplish is a more immediate link between the backend AI systems and the person in the field.

One of the first ways AR is helping in manufacturing is simple. Take a warehouse. When there’s a lot of products moving through, checking inventory can be slow. With an AR system, a person can look at a group of boxes, the backend system can count the boxes. That’s just simple visual AI. However, that count can be integrated with inventory and shipping systems, the count can be compared to the expected count, and a display can pop up, for instance, telling the person to look for two more boxes that should also have been in the order.

Another example is in physical safety. It’s one thing to notice if someone is wearing a hardhat. That’s now in the “must have,” more basic visual identification tools. Let’s extend that. The visual system can capture warning signs requiring hardhats, gloves, and other safety measures, or even use the GPS information and database content about the manufacturing floor to know what safety measures are required at each place on the floor. “Gloves are a good example of how the power of AI can be used to improve safety on the manufacturing floor,” said Dr. Hendrik Witt, Chief Product Officer, TeamViewer. “AI can now not only detect whether you are wearing gloves, but whether you are wearing the right type of gloves for the specific situation, and then immediately notify the worker for a safety correction.” 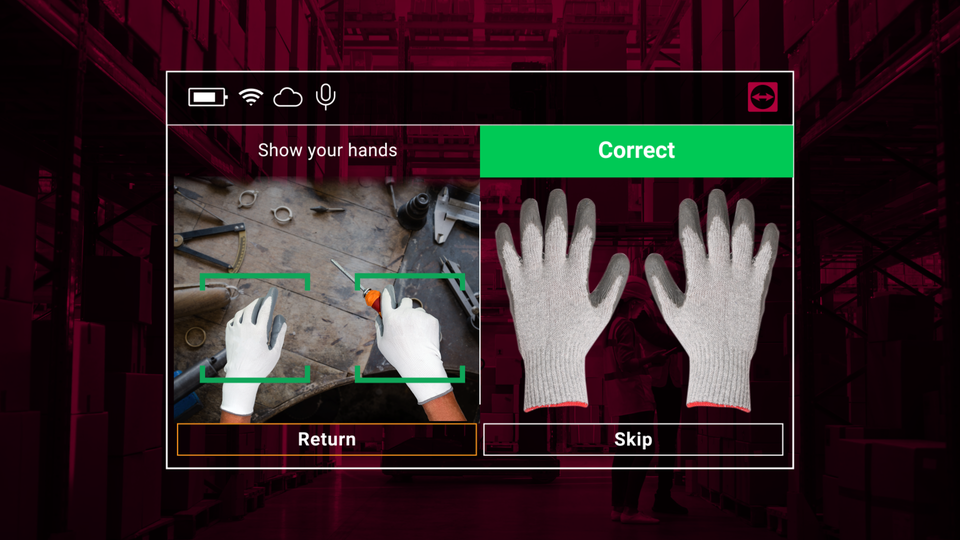 A final example is another safety issue. Background process analytics, using either AI or standard analytics, can be run to estimate potential for fatigue. A person lifting 10 lb. Boxes doesn’t get as tired as fast as the same person lifting 40 lb. Boxes. Reminding people when to take breaks is just as important to safety as making sure the people are working safely.

An aspect of AI/VR that has also slowed adoption is the need for companies to hire experts in that function, experts who aren’t in vast supply and who cost more. Companies such as TeamViewer are working to simplify the training of the systems, making them as low-code as possible. This is what other cycles of technology have had to do in order to widen adoption. It’s also something that is one of my key soapboxes. Very few companies need to have the magical data scientist. What needs to happen is the building of systems that can talk to the line users in the language they know.

“Modern augmented reality is about more than the important goal of improving safety,” said Witt. “It’s about understanding process flows, about integrating AR systems with more of the full range of ERP and other backend software, not only with AI. It’s about having systems that non-specialists can use to accomplish their own tasks.”

The aforementioned glasses were a fad, something cool for a small audience. AR is now being applied to more focused arenas, including in the manufacturing sector. That focus may finally bring the ROI to an investment in AR and AI that will spread both more widely.

This article was written by David A. Teich from Forbes and was legally licensed through the Industry Dive Content Marketplace. Please direct all licensing questions to legal@industrydive.com.

Why Are Rugged Tablets the Best Fit for Forklift Computer Systems?

What is the Role of IoT in the Manufacturing Sector?

This article discusses applications of the Internet of Things (IoT) in the...

The Role of Mobile Solutions for Production Control and Quality Assurance

Since late 2019, the world’s manufacturers have faced several significant challenges and...

Investment in advanced digital technology, including ERP solutions, is essential for manufacturers...

Every day you’re faced with moments when critical choices must be made....

The Panasonic TOUGHBOOK A3 is a rugged Android™ 10.1" tablet that is...

The 10.1” Panasonic TOUGHBOOK® G2, is a groundbreaking modular fully-rugged tablet 2-in-1...

Digital Transformation in the Warehouse: The Role of Mobile Solutions

Learn how technology is helping companies digitize the warehouse and increase operational...

Industry 4.0: A Mobility Checklist for Manufacturers

Find out what to consider when investing in manufacturing mobile devices.

Learn how manufacturers and utilities use data at the edge and mobility...

Find out how mobile solutions support an end-to-end supply chain in this...