UPS workers make dozens of decisions every day, and the wrong ones – from placing a box on the wrong conveyor belt inside a processing facility to loading it onto the incorrect delivery vehicle – could keep you from getting your packages on time.

Avoiding those mistakes, and doing so efficiently, is key to the company’s survival. The boom in e-commerce means UPS now delivers as many as 31 million packages a day. Keeping track of all that is an immensely difficult problem. It’s made worse because fulfilling online orders often requires driving to far-flung residences. That is more expensive for UPS than delivering to businesses, where drivers typically can leave and pick up multiple packages at each stop.

And the recent news that Amazon is preparing to launch a low-cost package delivery service means UPS is about to face intense competition from a company with top customer-tracking capabilities and even artificial-intelligence expertise.

UPS sees advanced analytics as critical to addressing this challenge. In 2016, it began collecting data across its facilities. Today there are about 25 projects based on that data, grouped under the acronym EDGE (which stands for “enhanced dynamic global execution”). The program has sparked changes in everything from how workers place packages inside delivery trucks in the morning to how the vast army of temporary hires that UPS recruits during the busy holiday season are trained. Eventually, data will even dictate when UPS vehicles get washed.

The company expects to save $200 million to $300 million a year once the program is fully deployed. 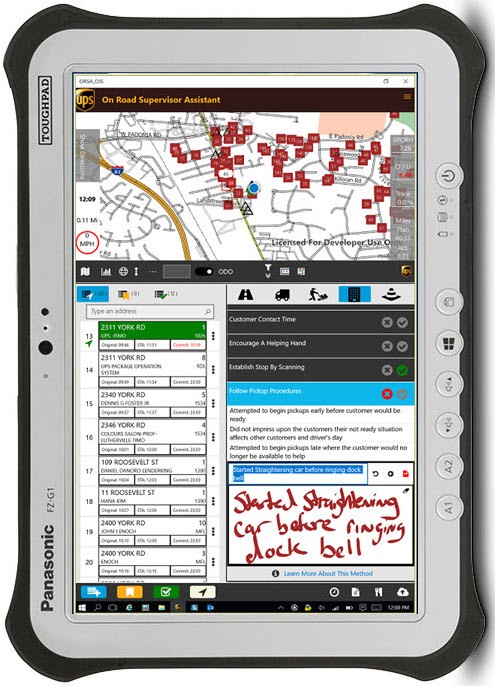 UPS is also giving supervisors tablet computers that have mapping and routing software and digital checklists for assessing driver service, safety, and performance. The company plans to analyze the data to improve customer service.

EDGE is only one of several technology projects UPS is undertaking to improve its deliveries in the 220 countries and territories it serves. Its $1 billion annual technology budget also covers upgrades in drivers’ tools, including the handheld computing devices they use to scan packages and collect customer signatures, and mapping software called ORION (for “on-road integrated optimization and navigation”) that calculates the most efficient way for drivers to complete their routes. The company is also investing in more of the machines that automatically sort packages in UPS processing facilities and developing technologies that reroute packages between UPS planes and trucks to minimize costs and delays, says chief information and engineering officer Juan Perez.

Last year UPS started equipping its delivery trucks with plastic Bluetooth receivers to reduce the likelihood of misloaded packages. The rectangular beacons, which measure about five inches long and attach to the interior of the truck, emit a loud beep if a worker places a parcel into a vehicle that’s not headed to the package’s destination. When workers enter the correct truck, they hear a different beep that confirms they’re in the right place. The system operates by passing wireless signals between the Bluetooth beacons and the scanning devices that workers wear on their hips and hands to read the labels on UPS packages.

Before developing the technology, UPS didn’t do a final scan of parcels that confirmed the truck on which they belonged. Drivers who discovered errant packages had to travel out of their way to deliver them or summon a supervisor to transfer them to the correct truck.

Now UPS can curtail these delays and give consumers more details about upcoming deliveries. When UPS workers scan packages in the morning, the data updates the service the company has put in place to send people progress e-mails about their shipments. Customers who have signed up for the free service then receive a message that their package will arrive that day, along with an estimated delivery time. UPS has incorporated Bluetooth beacons into 35 percent of its US driver routes, as well as a site in Germany, and plans to extend the system to Canada and the UK.

Another project tells seasonal workers where to direct the outbound packages that UPS vehicles pick up throughout the day and bring to the company’s sorting facilities. UPS hires nearly 100,000 of these workers from November through January. Typically, these people would need to memorize hundreds of zip codes to know where to place parcels, but last winter UPS outfitted about 2,500 of them with scanning devices and $8 Bluetooth headphones that issue one-word directions, such as “Green,” “Red,” or “Blue.” The colors correspond to specific conveyor belts, which then transport the packages to other parts of the building for further processing.

Of course, UPS still botches some deliveries, so the company also has a project that tells managers how many returned parcels will arrive at their processing center and when. That way, they can assemble the appropriate number of workers to reroute the packages. The data comes from a variety of sources, including drivers’ handheld computing devices and the ORION software, which UPS first launched in 2013. UPS transmits the information in real time to managers’ Samsung smartphones and presents it in the form of line graphs that show how many incoming packages there are, how quickly they are being processed, and which worker groups are busiest, so people can be allocated where demand is highest.

Previously, UPS managers relied on historical data and radio conversations with drivers to gauge how many undeliverable parcels they would need to handle each night. John Dodero, UPS’s vice president of industrial engineering, says the project makes the company more productive and gets misdirected packages to intended recipients sooner.

Is all this effort enough to fend off Amazon if it begins competing directly with UPS, as rumored? Barbara Ivanov, a logistics expert at the University of Washington’s Supply Chain Transportation and Logistics Center, which is partly funded by UPS, thinks that Amazon poses a threat. “Amazon does have the money and ability to set up a new freight and parcel delivery company, and the disruptive thing is that they’d be able to start from scratch, with technology at the center of their operations,” she says.

Still, Amazon’s current delivery infrastructure lags far behind that of UPS or FedEx. “Amazon has good presence in cities, where it will employ contractors in vans to make quick trips,” says Ivanov. “But to be a major parcel delivery firm, you have to be omnipresent in every part of the world, and those are very expensive networks to build and maintain.”

Thomas H. Davenport, a Babson College professor who studies corporate analytics programs, says that UPS has more logistical know-how than many people realize. “EDGE is just the latest in a series of large-scale, long-term UPS technology projects related to things like tweaking driving routes and telematics on trucks, with each new thing building on the previous capability,” he says.

Amazon does have a head start in artificial intelligence, and UPS is still trying to catch up. In 2017, it established an advanced technology group that is researching ways to adopt AI. “Down the line, there will be AI in EDGE,” says Dodero. “Our engineers are already building algorithms to help determine the best job setup for the day.”

Might it be too late? “UPS needs all the technology and analytics and AI it can get if it’s going to compete with a company like Amazon,” Davenport says.

This article was written by Elizabeth Woyke from MIT Technology Review and was legally licensed through the NewsCred publisher network. Please direct all licensing questions to legal@newscred.com.

The Panasonic Rugged Mobility for Business blog occasionally posts licensed third-party content we believe is relevant to our audience.

For more information on Panasonic mobility solutions, visit us online.

The last mile is getting more attention in this era of eCommerce...

How to Automate and Simplify Last-Mile Returns Management

Much like their B2C counterparts, B2B companies are handling a much higher...

For diesel techs, AR and VR are changing the recruitment game

While the driver shortage and its supply chain impact may dominate headlines,...