Understanding The Significance Of IoT In The Creation Of Circular Cities

The concept of a true circular smart city may seem impossible, but advances in technology are bringing us ever closer. The Internet of Things (IoT) has significant potential for making a circular economy possible, especially in areas like waste management and manufacturing.

Despite claiming, ever so often, to be “one with nature,” humans rarely align their behavior with how natural ecosystems actually work. For example, nearly everything about nature is cyclical – precipitation, the oxygen-carbon dioxide interchange, the relationship between energy and matter and several other examples. In contrast, humans’ resource usage is almost always linear, following a close-ended take-make-consume-dispose path. As per a study, nearly 75% of municipal solid waste consists of discarded, still-usable consumer goods.

The circular economy concept – an economy that incentivizes the reusing and recycling of resources rather than discarding them before extracting and using new ones – uses nature as a template to create an ecosystem in which, ideally, every product or technology is endlessly recyclable and reusable. In recent years, the circularity of the world has actually regressed – from 9.1% in 2018 to 8.6% in 2020. This means that less than a tenth of the total consumed resources are recycled every year worldwide. As you can expect, building a circular economy requires investment in technology and trained personnel for ensuring that resource wastage remains at a minimum – ideally, zero. The path to circularity is shortest for smart cities as they already use connected technology with long-term sustainability in mind. IoT and sustainability go hand in hand to turn smart cities into circular cities – zones wherein circularity is ingrained across all functions, in perfect collaboration with businesses, researchers and smart city inhabitants.

The Role of IoT in Creating Circular Cities 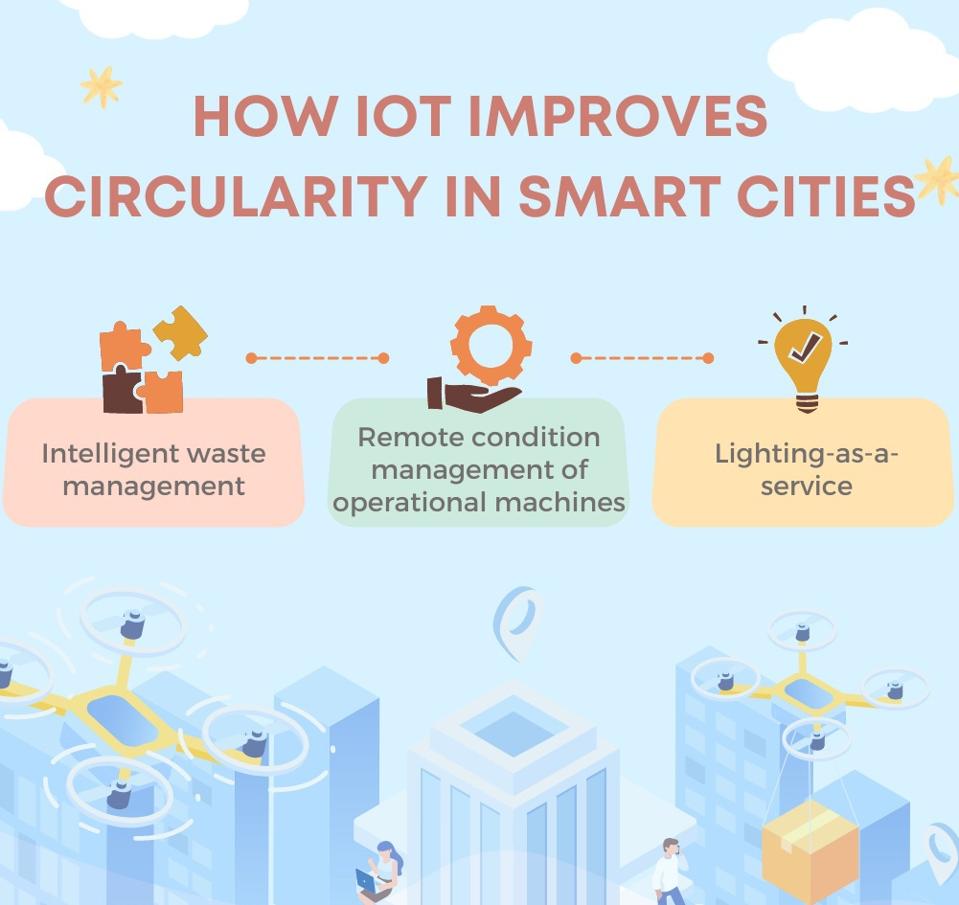 Understanding The Significance Of IoT In The Creation Of Circular Cities

While there is no urban zone in the world that can be cited as an example of a perfectly circular city, there are multiple instances of cities employing certain elements of green infrastructure to harness and use or reuse natural or manmade resources. Berlin, for example, extensively uses green roofs over several houses across the city for multiple purposes – protecting the houses from sunlight and high temperatures and, in many cases, harnessing sunlight through solar panels for energy generation. In Malmö, Sweden, the urban water treatment infrastructure plays a part in recycling stormwater for renewable energy generation. A common thread running through these examples is the use of IoT and sustainability tools to boost the overall circularity.

As stated earlier, a sizable proportion of discarded waste includes resources that can be repurposed or recycled. To achieve that, circular cities need to install a city-wide integrated IoT-driven waste classification device network to verify the recyclability of waste in trash cans and dumpster grounds all over smart cities. Such an IoT and sustainability-based network can involve computer vision cameras to closely scan waste objects before classifying them as “recyclable” if they’re beyond a certain quantifiable threshold limit regarding the same.

Circular economies follow the philosophy of minimizing waste. By using IoT and sustainability-based principles and tech, circular cities can successfully follow that philosophy for the long term.

Ideally, the metaphorical circle in a circular economy should be infinite – or as big as possible – to ensure that the overall concept is working in smart cities. This translates into prolonging the life of every resource or component as much as possible through strategically carried out repairs, maintenance and monitoring. The high-octane machines used in manufacturing offer an obvious example of how IoT and sustainability tools can ensure long-term circularity.

Manufacturing machines need to operate at full pelt for hours on end in smart factories. So, unsurprisingly, the chances of production – and, similarly, other supply chain machines – eventually breaking down is an inevitability. IoT-based data receptors on manufacturing machines can dynamically monitor factors such as machine temperature, power usage, vibration levels, workflow smoothness, pressure, issues during the transition between different production phases. IoT-based sensors collect this information and inform technical teams conducting the monitoring about prospective issues with machine fluid levels, adverse pressure changes and other factors indicative of a need for repair or refurbishment. Companies selling the manufacturing equipment can carry out this exercise to remotely assist manufacturers with optimizing resource utilization and preventing unnecessary downtime. In this way, a connected IoT network lets such companies provide positive post-sales customer service and, in the long run, build genuine brand loyalty.

IoT-based sensors are used for mainly two purposes in remote condition monitoring and management – finding areas in which production machines need improvement or repair and directing manufacturers or the service provider’s own maintenance team regarding what exact measures need to be taken for maintaining high levels of resource-efficiency and productivity during daily manufacturing-related operations. Furthermore, IoT and sustainability-based tools in such machines also accurately collect information and notify manufacturers about the requisite patches and upgrades required on a regular basis for industrial equipment. This feature will ultimately avoid issues such as wear, lubrication-related problems and excessive resource usage by manufacturing machines.

Manufacturers in circular cities need to produce goods that are completely recyclable. For that purpose, they’ll need to use circular materials. IoT-based material tracking systems let them verify the claims of suppliers who state that their supplies meet the manufacturer’s recyclability requirements. An integrated provenance tracking network is a unique circular city application with several components involved in the process.

Regulating resource use and reducing wastage are central to the core ethos of any circular city, and there isn’t a category of waste bigger than the prospect of discarding massive industrial machines that can still get by and perform optimally with a few repairs and refurbishments. The information receptor and transmission tools in manufacturing equipment can prolong the life of such equipment and increase their sustainability factor – an aspect that arguably ranks higher in circular cities than other conventional smart city factors.

If there’s one thing common about most smart cities around the world, it is the enormous amounts of power their citizens consume on a daily basis. Various kinds of lamps are everywhere – massive screens on the side of buildings, kiosks at every turn and intelligent indicators and lamps at various nooks and corners. Lighting is something that domestic, commercial and public places simply cannot do without. However, the excessive usage of lights and other electronics makes such cities unsustainable to a great extent. About 75% of the world’s CO2 emissions are found in urban areas due to such power usage, and lighting constitutes a major part of that figure too.

To offset this problem and share lighting usage between multiple users based on their requirements, the concept of Lighting-as-a-Service (LaaS) has emerged in recent times. LaaS involves third-party service providers providing the lighting infrastructure to companies and residential areas. This allows such areas to save the cost of setting up the lighting apparatus and other luminaire-related infrastructure in their buildings and workplaces. For a small monthly fee, such building owners can use a shared lighting network provided by LaaS companies. As you can imagine, the monetary and environmental costs of setting up their own luminaires are high, so using the LaaS option not only allows them to save money but also sidestep the polluting operations of buying and installing their own lighting infrastructure. The Schiphol Airport in Amsterdam uses LaaS to cut down on costs and enhance circularity.

Circular city administrators generally look to reduce power consumption to improve sustainability and circularity. According to a claim by lighting giant Phillips, a combination of LaaS, intelligent control systems and energy-efficient lighting sources can save up to 80% of total energy consumption. LaaS is an integrated, shared IoT-based infrastructure involving hundreds of sensors for remote and autonomous control of lighting in a facility. Such an infrastructure then controls the lighting intensity based on their requirement and whether lights should be switched on in specific zones of a facility, such as parking lots and large corridors.

Circularity is much more than just the recycling and reusability of resources. While those elements collectively form a big part of circular cities, the prospect of autonomously saving energy whenever possible to improve sustainability also holds importance. LaaS ticks that box for circular cities.

Smart cities push the boundaries of maximalism to make their citizens’ lives comfortable. However, the public officials and citizens staying in such regions need to act responsibly to sustain the planet too. With IoT and sustainability-based tools, smart cities are technologically and economically the closest when it comes to creating circular cities. Although perfect circular cities may never exist because achieving 100% perfection is improbable, smart cities must make the most of the IoT and sustainability applications to get as close to that target as possible.

This article was written by Naveen Joshi from Forbes and was legally licensed through the Industry Dive Content Marketplace. Please direct all licensing questions to legal@industrydive.com.

How IoT Benefits Productivity on the Plant Floor

The Industrial Internet-of-Things has been essential to the success of automation and...

How Tech And IoT Is Improving Warehouse Operations

With warehousing space at a premium, it’s essential for warehouse managers to...

The overall tech savviness of employees is rising with more younger workers...