Is micro-fulfillment tech living up to the hype?

While micro-fulfillment centers have quickly become a cornerstone of grocery and retail e-commerce fulfillment networks, the development of technology to support MFCs has lagged behind the establishment of the facilities themselves. Developers in the MFC technology sector will likely increase the pace of development as we move beyond 2021 and in the direction of a post-pandemic environment.

Prior to the pandemic, micro-fulfillment companies like Fabric, Takeoff Technologies and AutoStore, along with some industry experts, touted scaled-down automation systems as must-have technology for grocers facing a future of escalating e-commerce sales.

That future arrived early – and all at once – in 2020, when the global health crisis hit and pressed grocery e-commerce to its limit. But the expected rapid expansion by grocers of MFC technology, which seems made for the moment with its focus on quickly and efficiently assembling online orders in tight spaces, has not materialized at the level many expected.

Instead of rapid-fire partnership announcements and scale-ups with retailers, rollouts have come in dribs and drabs, with retailers seeming to take a cautious approach to implementing the systems in their stores and in dedicated facilities.

“There’s a lot of misinformation out there. And I think for the retailers, it’s very difficult to navigate this minefield because they don’t really know enough about the technology and the automation to be able to accurately say whether or not they should go one way or another,” said Marc Wulfraat, a supply chain expert and president of MWPVL International, who frequently consults with retailers on MFC technology.

There are some exceptions, most notably Walmart, which in January announced it would test micro-fulfillment technology at dozens of stores, covering a range of providers and configurations. Albertsons has enthusiastically endorsed MFCs, having forged a commercial agreement with Takeoff Technologies in 2019. The company opened its third MFC in April and plans to open six more in 2021, for a total of nine, President and CEO Vivek Sankaran said during the company’s fourth-quarter earnings call. 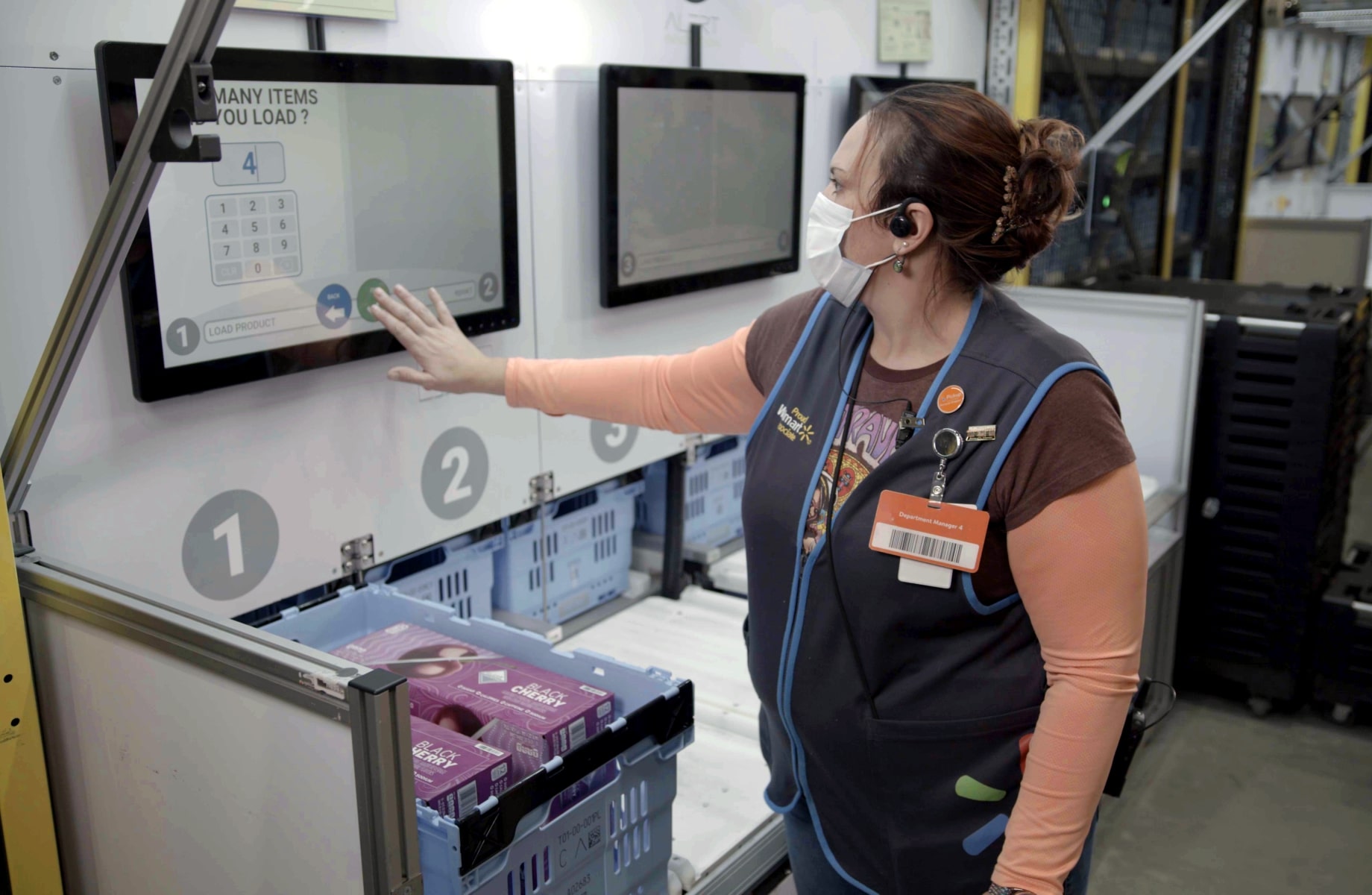 Technology firms say the underwhelming expansion so far is partly due to retailers pausing negotiations and implementation plans for several months last year as they contended with strained supply chains and enacting safety measures. Grocers halted negotiations and plans to test facilities for anywhere from six to nine months and are now back on track, said Steve Hornyak, former chief customer officer at Fabric. He said 2021 will be more of a “test and learn” year than a period of dramatic expansion, with larger rollouts more likely to happen in 2022 and 2023.

Activity in the MFC space has indeed picked up in recent months, with H-E-B, The Giant Company and H-Mart all announcing deployments. This summer, SpartanNash plans to open an MFC in Grand Rapids, Michigan, to serve delivery and pickup orders for some of its retail stores, CEO Tony Sarsam said.

And then there’s Instacart, which has sent out requests for proposals to MFC vendors as it explores offering fulfillment as a service for retailers. According to one source with direct knowledge of the company’s plans, Instacart aims to offer fulfillment services for small and mid-size retailers as large chains like Kroger increasingly forge their own fulfillment services.

The need for high volumes

Despite this recent momentum, some analysts say grocers that have started testing MFCs are struggling to wring promised cost savings out of the systems.

Wulfraat said systems require a higher volume of incoming orders than many grocers realize to justify their hefty price tags, which can range from a few million dollars to around $10 million. He also said grocers are struggling to come out ahead financially in the face of ongoing costs, like transaction fees of up to several cents per unit shipped, and system maintenance, he noted.

The systems are also dizzyingly complex, Wulfraat said, with additional processes often cutting into efficiency. Some systems only have 50% of a store’s assortment in automated storage, requiring retailers to operate separate, sizable manual-picking operations and venture into stores to “top off” orders, which adds time and labor costs. If grocers run a hub-and-spoke model where a greenfield MFC fulfills pickup orders for multiple stores, that can add handling costs and complexity.

“The pennies really add up when you look at the journey of an order tote through these systems,” Wulfraat said.

What makes more sense at this point, Wulfraat said, are medium-sized automated facilities that handle a high volume of online orders – in the range of 10,000 to 15,000 per week – and can serve incremental demand. 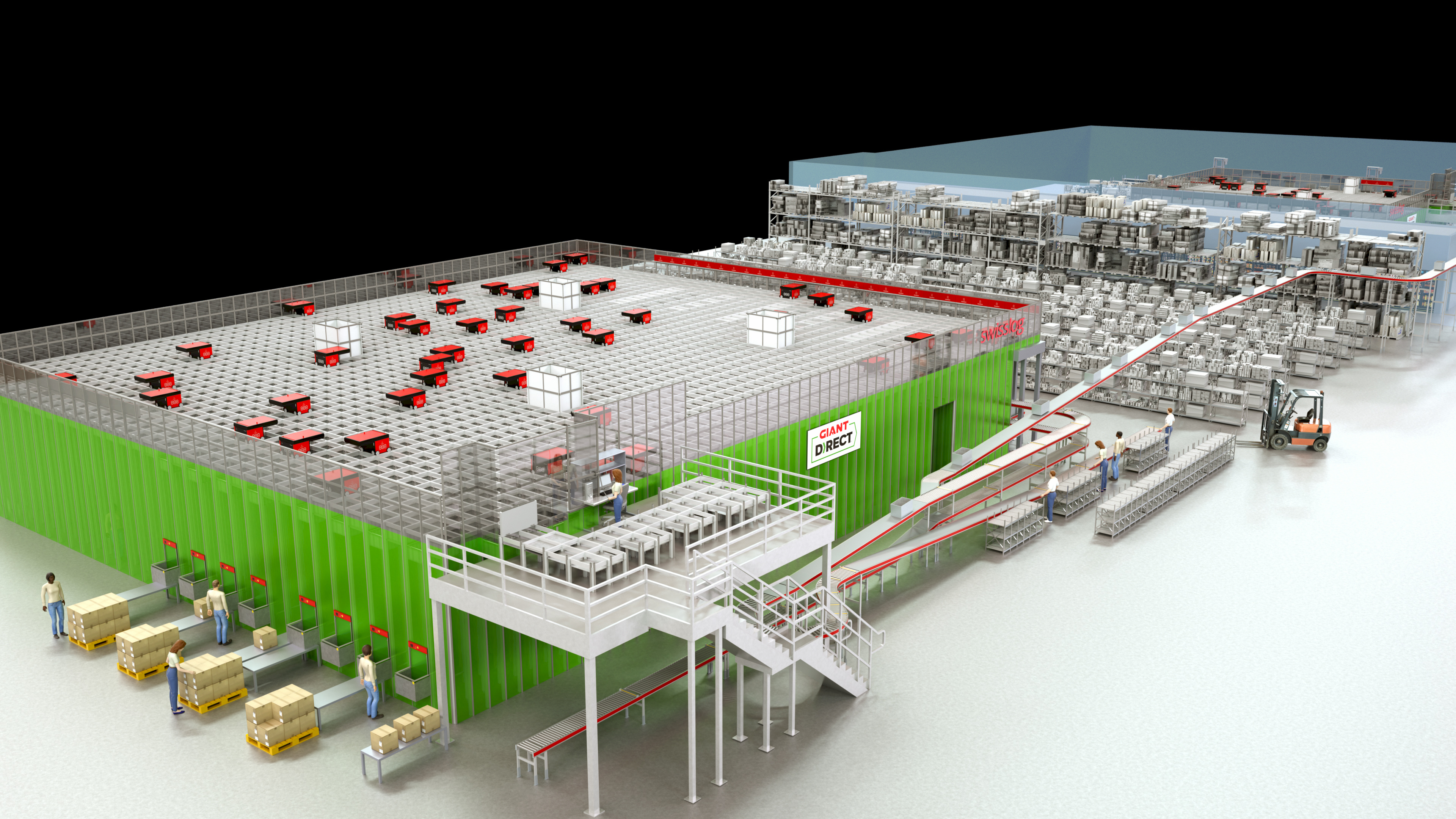 Courtesy of The Giant Company

Wulfraat cited the 124,000-square-foot e-commerce facility The Giant Company is building in Philadelphia in conjunction with AutoStore and Swisslog, which is set to open in November, as an example of how micro-fulfillment technology can help a grocer’s bottom line. That system is projected to process around 15,000 weekly orders.

“They’ll be able to do semi order fulfillment out of that building for this new population of customers that they currently don’t necessarily serve,” Wulfraat said. “[It] makes total sense to me to go about doing it this way … because you’re getting new sales.”

Mike Demko, global head of the MFC business line at AutoStore, said the Norwegian automation company has lately been seeing strong interest from retailers in its technology, in large part because of the sharp focus the pandemic has placed on e-commerce. But he acknowledged it’s challenging to convince potential clients that the investment needed to automate their fulfillment operations is worthwhile.

“MFCs are really about trying to provide faster service for the consumer … but the flip side of that is it’s got to make economic sense,” Demko said. “Grocers are scratching their heads to make sure the math works, so that they just don’t plow money into something that can [help] meet consumer demand but doesn’t help the bottom line.”

Bill Bishop, chief architect with Brick Meets Click, who also consults with retailers on fulfillment strategies, said many grocers have landed on less-expensive fulfillment options like manual dark stores, backroom picking and in-store picking using handheld devices. Companies are also watching to see how automation ventures like those at Walmart and Kroger, which recently began delivering from two robot-powered Ocado warehouses, pan out before investing.

Bishop said many grocers struggle to evaluate automated micro-fulfillment along with other leading-edge technologies that come before them against the backdrop of mounting industry disruption.

John Lert, founder of Alert Innovation, acknowledged the complexity of MFCs, calling them an “imperfect” solution that retailers have approached cautiously so far.

“Retailers everywhere are looking at this. They’re experimenting, they’re deploying these systems and investing in them. But so far, there’s also been enough dissatisfaction or complexity or lack of economic return that you don’t see a large-scale rollout yet,” Lert said.

Wulfraat says grocers are increasingly aware of the fact they need to get online picking away from store floors in high-volume areas. He says there is no perfect fulfillment system right now: “All of the options out there have upsides and downsides, including manual dark stores.”

Demko said the fact that there are limits to using human workers to fulfilling e-commerce orders represents a big opportunity for MFC companies that can come up with a balance of hardware, software and processes that enables retailers to become more efficient without sagging under the weight of the technology.

MFC vendors are working to hone their offerings and make them more appealing to retailers. One way they’re looking to accomplish that is by allying with companies that make technology complementary to their automation systems.

Takeoff, for example, entered a strategic alliance in March with refrigeration company Hussmann that gives the MFC supplier direct access to systems designed to keep food cold while it is being handled. In a press release, Takeoff CEO José Aguerrevere described the partnership as a significant advance in the company’s efforts to meet retailers’ needs.

“Any e-grocery solution relies on safe product temperature control to ensure food integrity of refrigerated and frozen items. This alliance represents an incredible opportunity to strengthen our solution,” Aguerrevere said in a statement.

In January, AutoStore acquired Locai Solutions, a provider of pick-and-pack software to retailers, after concluding that offering MFC technology alone might not be enough to enable some grocers to use it effectively, according to Demko, who co-founded Locai and joined AutoStore as part of the acquisition in January.

Demko added that companies like his that specialize in warehouse automation play an important role in helping smaller retailers compete with larger competitors that have deeper resources. “We make the tools that an Amazon has cost-effective for the small independent retailer” that doesn’t have the ability to develop technology on its own, but is looking for new tools to help it compete, Demko said.

Industry sources and officials note that even as the MFC industry continues to mature, it is ripe for consolidation in the years ahead.

“A lot of capital to your point is being thrown at this but I don’t think it’s something that a small player will be able to survive at,” Demko said, adding that he expects two to four players to ultimately remain standing in the MFC sector. “The reality is there will be consolidation through either acquisition and or just companies failing.”

This article was written by Jeff Wells and Sam Silverstein from Supply Chain Dive and was legally licensed through the Industry Dive publisher network. Please direct all licensing questions to legal@industrydive.com.

In recent years, the ELD mandate and changing consumer expectations led to...

How Does the IoT Reduce Manufacturing Downtime?

In the manufacturing sector, any unintentional disruption in operations can have a...

Logistics 5.0: The Final Piece In The Supply Chain Optimization Puzzle?

In the manufacturing and logistics industry, the challenges brought about by the...

In recent years, businesses and the departmental functions and processes within them...