America’s warfighters need reliable mobile communications, analytics, and collaboration tools both out in the field and in their operations centers. Here’s how they’re leveraging that mobile technology to work more efficiently and effectively.

Last year, the U.S. Air Force threw down the gauntlet for game developers, programmers, engineers, and students. In search of a mobile game to enrich the space training experience for military members, the Air Force is working with tech innovation center MGMWERX to come up with a mobile-friendly app to teach concepts such as space-lift and orbital mechanics.

“It is becoming readily apparent to us that our potential adversaries are putting threatening capabilities into orbit,” Maj. Patrick Gaynor told the Montgomery Advertiser. “We are trying to find ways to better prepare our airmen and our lieutenants to potentially counteract those threats and protect and defend our capabilities in space.”

This is just one way the military is growing its mobile-first strategy. In another example, the Defense Advanced Research Projects Agency (DARPA) and the Marine Corps recently tested a system of autonomous air and ground vehicles combined with sensors and off-the-shelf mobile technology.

Used to coordinate troop movements while accounting for their physical, electromagnetic, and cyber environment, Squad X incorporates lightweight handheld devices that allow squads to employ capabilities that were previously too heavy or cumbersome (before being miniaturized).

“In a week of exercises in various combat scenarios, Marine squads showed how they could work collaboratively with robotic vehicles while maintaining situational awareness of surrounding threats, be they visible or not,” MeriTalk reports, noting that by the end of the exercise, troops were using the unmanned ground and aerial systems to maximize combat power and allowed one squad (16-44 soldiers) to complete a mission that normally would take a platoon (60 to 200 soldiers) to execute. 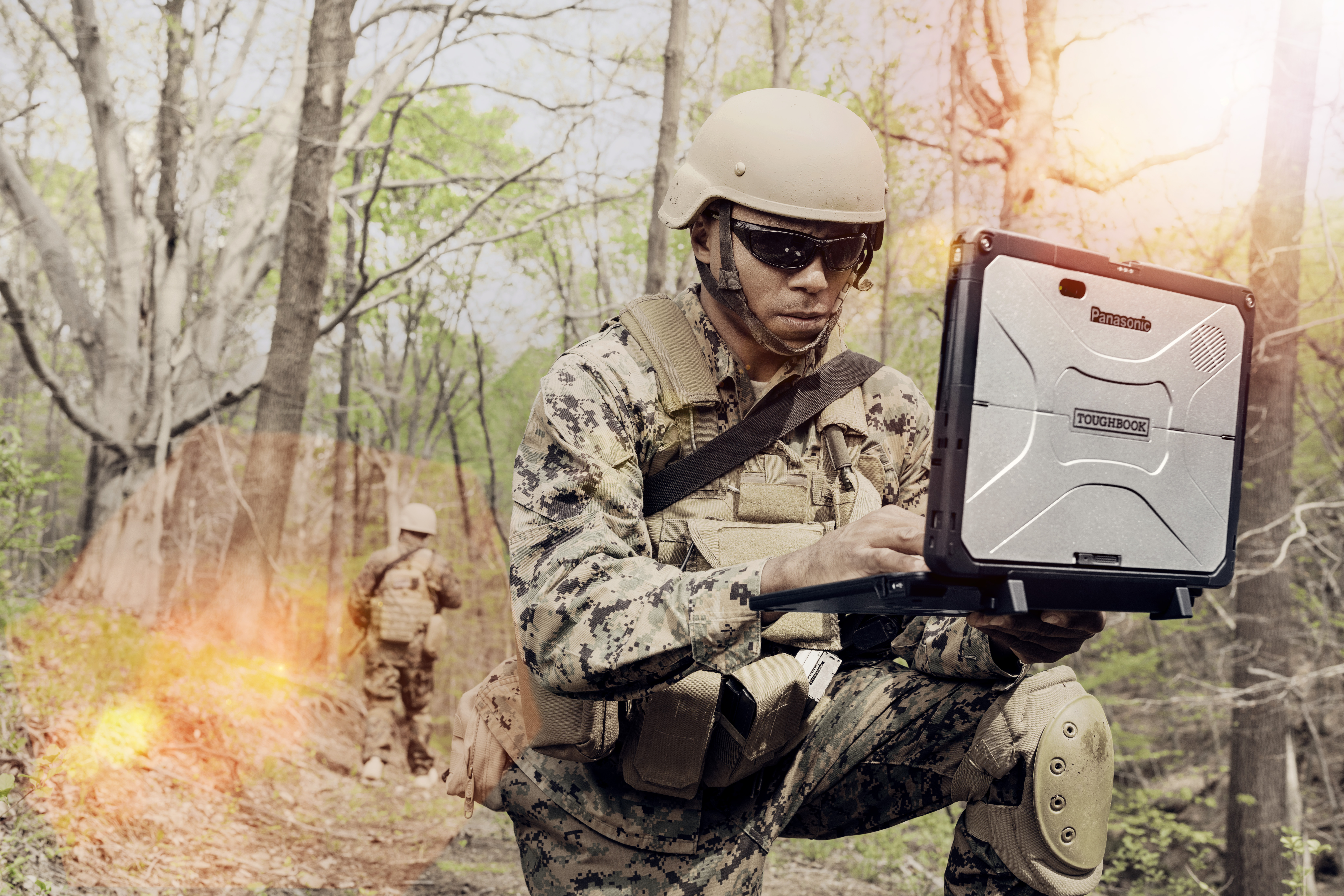 As purpose-built mobile tablets, handhelds, and laptops with capabilities like thermal imaging cameras or RealSense camera technology integrated into one device make their way into military operations, those innovations are helping the military trim costs while giving warfighters tightly focused capabilities.

“Military leaders are endorsing the role of these mobile, integrated devices, though their implementation may evolve slowly, as technical specialists grapple with a myriad of issues,” Defense Systems points out. “Military electronics have always been designed for specific roles and given to select personnel. Now, technology experts must grapple with the emerging bring your own device (BYOD) movement, in which rapidly-changing equipment from Apple and a range of Android suppliers must all be connected in compatible networks.”

The military’s edict to equip modern-day warfighters with the most advanced, reliable mission-critical technology is a given.  But today’s warfighters expect more, and their demands are being addressed. Today’s mission-critical technology initiatives include a preference for the same, familiar ease of use mobile device technology, applications and immediate connectivity to information and communications at their fingertips on the battlefield.

A New Level of Mobility

Panasonic has been helping the military equip personnel with purpose-built mobile technology for decades, assisting it in fully leveraging mobile computing technology for secure data access and capture, as well as communications functions that mobility brings to the field or frontlines. Today that means incorporating high-tech mobile solutions that can be configured to military standards and mission tasks (while still offering ease of use), enhancing productivity, and allowing warfighters to work smarter, faster, and safer out in the field.

Take the U.S. Navy, for example. With an eye on using mobile technology to establish a secure paperless environment both in its physical facilities and out in the field, it needs mission-built rugged mobile technology to achieve that goal. When Navy aircraft land on the tarmac for maintenance, mechanics grab their Panasonic TOUGHBOOK tablets and get to work. Completely digitized, the maintenance manuals and aircraft maintenance data are now just a few touchscreens or keyboard taps away. And technicians can leave their gloves on during use (no need to remove them to “thumb” through a manual), thus enhancing productivity and the safety factor.

The military is also investing in advanced technology like artificial intelligence (AI), augmented reality (AR), and the Internet of Things (IoT), often integrated with mobile devices to help improve its efficiency and productivity. In 2018, for example, one U.S. Navy base began testing a wearable designed to link remote healthcare providers in disaster zones or battlefields with more experienced specialists. Developed at Purdue University, the headset uses AR to give doctors and specialists a virtual view of what the mobile healthcare provider is seeing. “The most critical challenge is to provide surgical expertise into the battlefield when it is most required,” said Purdue’s Juan Wachs.“ Even without having highly experienced medical leaders physically co-located in the field, with this technology we can help minimize the number of casualties while maximizing treatment at the point of injury.”

Another example is seen in the U.S. Army exploring the viability of an unmanned aerial vehicle (UAV) cargo aircraft that can transport 600 pounds of military supplies (e.g., ammunition, water, and food) to forward-deployed warfighters engaged on the battlefield. Communication about and control of UAVs via secure, purpose-built mobile devices is essential.

A top priority across many marines and other armed forces divisions, mobility will continue to play a critical role on the modern-day battlefield, where warfighters need anytime-anywhere-mission-ready device capabilities across a wide range of operations and job functionalities. And as it continues to expand its use of mobility on the frontlines, the Department of Defense (DOD) will continue to prioritize the purchases of highly reliable and secure devices, longer battery operation, and better connectivity to help drive improved mission outcomes, all integrated with advanced software connectivity tailored for the military.

Of course, not all military personnel are out on the battlefield; some are still making their way through basic training. In Cell Phone Use in Army Basic Training, Rod Powers discusses how Army recruits—who were previously banned from using their phones during this time period (save for phone calls home on Sunday)—now have more lenient rules regarding their phone use.

“One of the reasons the military is so successful is their willingness to take full advantage of new technology,” Powers writes. “Most adult members of our society carry a cell phone these days, and post-basic military recruits are generally no exception. As a result, cases of military members in Iraq and Afghanistan using personal cell phones to pass on vital military information to their commands when conventional military communication means failed are somewhat common and have very likely saved lives.”

As mobility’s role on and off of the battlefield continues to expand, expect to see more real-life examples of how technology continues to put more powerful communication and collaboration tools into the military’s hands. This, in turn, will help all branches of the service operate more effectively and efficiently today, and well into the future.

Knowing that the modern-day military needs holistic, mission-critical solutions that help warfighters work efficiently and safely both on and off the battlefield, Panasonic is focused on offering highly secure, reliable and configurable mobile computing for government and military use.