The Future Of Power Is Wireless: Here’s Why

The way we think about connecting to the electricity grid is changing. As off-grid power sources like solar panels and batteries become more available, people are unplugging from traditional sources. To manage this new power supply, utilities companies are investing in artificial intelligence and big data to accurately respond to energy demand. In this article from Forbes, the future of the smart electricity grid will involve cloud-based, mobile energy management.

In the next five years, we will see a transformative shift in the way we power our homes, businesses, and infrastructure. Today, most things are physically plugged into the electricity grid, which works like a master power outlet. This is notoriously inefficient—50% or more of the cost you pay for energy goes to the grid, the power cable, and distribution network. It’s extremely expensive to install, and ongoing maintenance costs are increasing yearly.

Think of the revolutionary impact of the wireless phone. Now, imagine that same impact on power. The future is one where power can be completely untethered and can be installed anywhere, at a fraction of the cost. This will create a huge disruption to the monopoly held by power distributors.

Wireless smart control, or smart off-grid, is going to be what enables this big shift in the power industry. Big Data, advanced analytics, and soon, artificial intelligence (AI), will also have a material impact on the performance and capabilities of off-grid systems.

Off-Grid Is The Disruptor

Most people are familiar with renewable energy because of the massive rollout of solar panels on many homes. But those systems are usually connected to the grid as well. Until recently, being completely off-grid was too unreliable to power anything more than a remote cabin, where grid electricity was impossible, and the diesel generator was there to act as back-up. If there were a few cloudy days when the battery couldn’t charge, the system would simply “run out of gas,” so to speak. And good luck if you wanted to vacuum at the same time as running the fridge! It was annoying, but people made do. After all, you were likely at the cabin so you could be ‘off the grid.’ 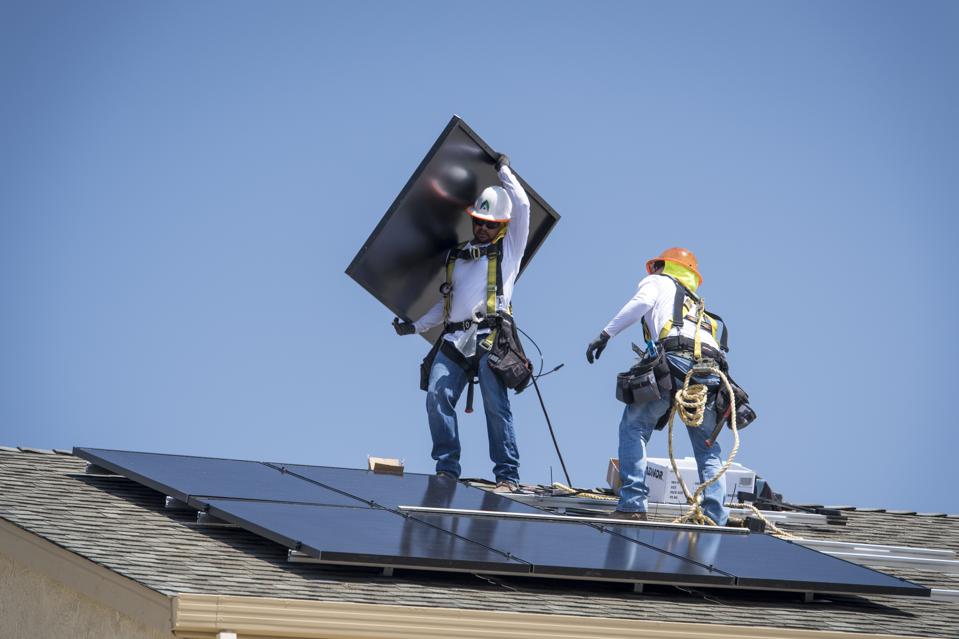 Contractors install SunRun Inc. solar panels on the roof of a new home at the Westline Homes Willowood Cottages community in Sacramento, California, U.S., on Wednesday, Aug. 15, 2018. California is the first state in the U.S. to require solar panels on almost all new homes as part of a mandate to take effect in 2020. Photographer: David Paul Morris/Bloomberg

For homes, hybrid solar supplemented by the grid is a great solution—and we’ve seen companies like SolarEdge and Sunrun take off in the past couple of years as a result. In 2018, SolarEdge had record revenues of $236.6 million, up 42% year-over-year. Much of this is driven by the social consensus that we should be using solar to power our homes—according to a 2016 study by Pew Research, while only 4% of homeowners in America have solar panels on their homes, 37% say that they are giving it serious thought.

However, when it comes to using off-grid solar for other applications – say, powering a traffic light or a railway safety device—renewable energy systems have proven too unreliable. Municipalities don’t want their street lights turning off if there are a few days without sun. Similarly, wireless providers need to be able to rely on their power source around the clock, so customers don’t lose cell phone service.

The Next Phase Of Renewables And The Grid

In recent years, companies like Tesla have sought to improve the storage and charging power of these batteries, to make them more reliable. Tesla has developed the Powerwall, a retail energy storage solution, which is being used to store energy from renewables on a massive scale. Innovations in analytics and smart algorithms are also creating lithium-ion batteries that charge faster, stay charged for longer, while also being safer and cheaper. And the costs of solar and storage are coming down. 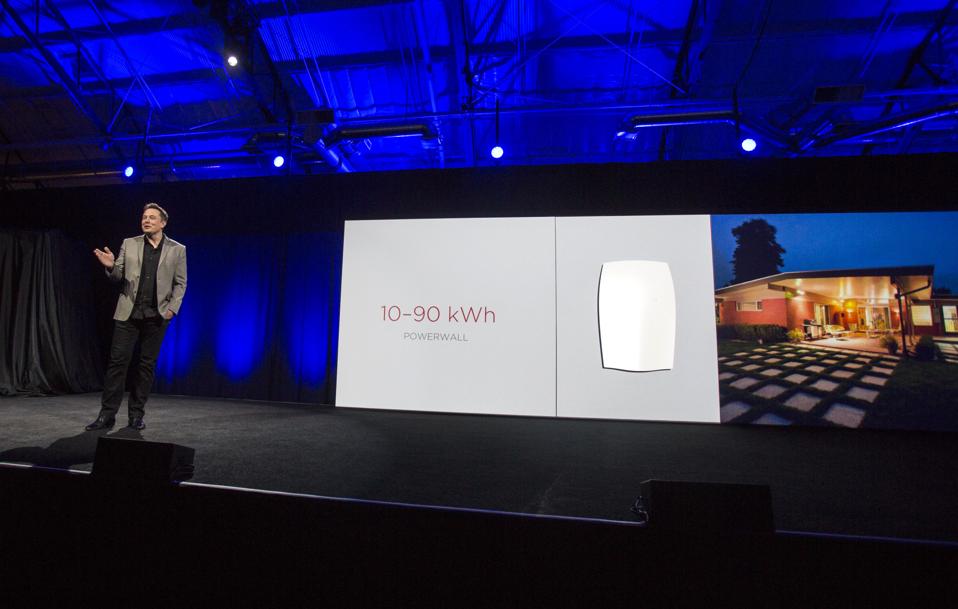 In this April 30, 2015 photo, Tesla Motors Inc. CEO Elon Musk unveils the company’s newest product, Powerwall, in Hawthorne, Calif. For now, and likely for several more years, Powerwall is a backup power source not much different from the generators for sale at any hardware store. At an installed cost of about $7,000, it’s an appliance that makes very little financial sense for most people. (AP Photo/Ringo H.W. Chiu)

But while innovation is important, we all know the real change will come when operations and maintenance of our infrastructure are easy, practical, and low cost. Imagine if you could monitor and control the off-grid power for thousands, if not millions, of traffic lights, cell phone towers, street lights, security cameras—really any Internet of Things device you can think of.

Through the use of built-in communications and big data analytics, across thousands of systems and with years of data history, energy and weather prediction capabilities can deliver major leaps in uptime performance and system life. Users are now able to anticipate when there won’t be enough energy, because either too much is being used or there is not enough being generated. Preventive actions taken long before the system fails, via cloud-based energy management software, means the system will never run out of energy. For instance, by turning down the luminosity of a street light by 10%, or reducing cellphone signal strength by one bar in the middle of the night, battery power can be preserved and the systems kept running – with little interference to our daily lives.

Eventually, these smart off-grid systems will be controlled by AI. With the use of Big Data, advanced analytics, and AI, utilities will be able to proactively anticipate energy demand and adjust settings accordingly for millions of off-grid solar-powered systems across the globe.

This will increase the reliability of off-grid solar, making it a truly viable alternative to the electricity grid for powering mission-critical infrastructure, not just for our businesses and homes.

Much of the change in how we power infrastructure is being driven by telecom and internet companies. The telecom industry has already been through the switch from landlines to cell phones, but power remains a prohibitive and costly problem in rolling out wireless telecommunications in many parts of the world.

In order to grow their revenues and users, telecom and internet companies need to tap into new markets, particularly emerging ones. Over the next decade, many are working to ensure that Africa delivers the next billion Internet users. But to get telecom connectivity requires power. In Africa, many communities live without reliable access to grid electricity.

The Telecom Infra Project, backed by Facebook, Nokia, Deutsche Telekom, SK Telecom and Intel, for instance, aims to bring more than one billion people online. It has multiple projects underway to improve power and connectivity in remote areas of the world. For instance, Telefónica recently installed telecom towers in the Amazon rainforest as part of its Internet Para Todos, or “Internet for All” initiative. These towers are powered by smart off-grid solar power. More than 25,000 Peruvians now have access to the Internet at a cost no higher than their urban peers, while reducing the capital expenditure for Telefonica.

Meanwhile, in developed countries, smart off-grid power can facilitate the roll-out of 5G infrastructure. At 500 feet apart, it will be costly to wire each of the 5G telecom towers to the grid and would limit coverage to areas where the electric grid is easily available – and getting power to the curb of dense urban areas can cost tens of thousands of dollars for each pole. Smart off-grid could be the ideal solution for keeping the cost of 5G roll-out low and expanding coverage to rural areas.

Disruptive Competition In A Monopolistic Industry

This new power paradigm will have a profound impact on the business of powering our homes and cities. Monopolies will see new and strong competitors. End customers, such as telecom companies and municipalities, will suddenly be empowered to act on their own. Ultimately, the benefit will be to the consumer – who will have many more viable choices than they have today.

The power industry must wake up if it hopes to maintain its market share, revenue, and profitability in this new world. Otherwise, Richard Branson’s next company might be Virgin Power!

This article was written by Miriam Tuerk from Forbes and was legally licensed through the NewsCred publisher network. Please direct all licensing questions to legal@newscred.com.

Make the American Jobs Plan Work for You

Labor shortages have gripped the United States across industries, with in-person field...

The smart grid — the biggest upgrade to the nation’s electrical infrastructure...

The United States experienced more severe weather events during 2021 than any...

Weathering the Storm: 4 Ways to Keep a Supply Chain Running During Natural Disasters

Catastrophic weather events and natural disasters have increased in frequency in recent...